Review of The Archetypal Imagination by James Hollis

This review was originally published in The Newsletter of the C.G. Jung Society of Montreal, February 2017. 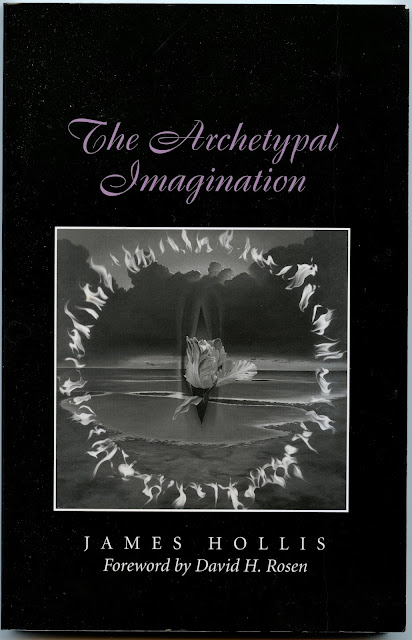 If you have time to read only one of James Hollis's books, The Archetypal Imagination is the book to read. Published in 2000 by Texas A&M University as part of the Carolyn and Ernest Fay Series in Analytical Psychology, the book is a part of Hollis's mission to explain Jungian psychology to a contemporary audience, often referring to literature and the arts in this endeavour. Hollis's erudite discussion of the archetypal imagination is brilliant; he writes, "It is the archetypal imagination which, through the agencies of symbol and metaphor and in its constitutive power of imaging, not only creates the world and renders it meaningful but may also be a paradigm of the work of divinity." (p. 7) Each chapter of Hollis's book begins with the same statement: What we wish most to know, most desire, remains unknowable and lies beyond our grasp. But what is it that we wish to know, what is it that we most desire, and why is it out of our grasp? There is a possible answer, it is found in the archetypal imagination.
Hollis states that the archetypal imagination is similar to the Romantic poets' concept of the imagination. For the Romantic poets the "imagination is our highest faculty, not our reason, which is delimited by its own structure." (p. 7) There is a place for the intellect and rational thought in understanding the unconscious mind, it is to lay a foundation of learning and knowledge about the way our psychology works. The archetypal imagination has a different place in understanding the complexity of the unconscious mind; Hollis writes, "What Coleridge called the secondary imagination was what Jung means by the archetypal power; the capacity to echo, perhaps to replicate, the original creation through the regenerative power of an image... " (p. 6) Coleridge posited and differentiated between a primary and secondary imagination; both concepts elaborated by Coleridge are more complex than Wordsworth's idea of the imagination but the essential idea of the Romantic imagination remains similar in both poets. The English Romantic poets found ultimate meaning not in reason—consider William Blake's criticism of those proponents of rationalism, Newton, Voltaire and Rousseau—but in the imagination; for the Romantics "the imagination was the door to divinity." (p. 7)
The feeling that life is meaningless is one of the existential dilemmas that many people experience at some point in their life; meaninglessness carries with it despair, hopelessness, alienation from the community, and anxiety. We question the purpose and value of our existence when our traditional supports, whether religious, social, or economic, are no longer present. Hollis writes, "The recovery of meaning not only relocates a person in a larger order of things but also supports a sense of personal identity and directs energies in life-serving ways." (p. 16) How do we discover a meaningful existence, how do we reconcile the conflict between the inner and outer world? Indeed, how is the wounded psyche or soul healed (for "neurosis is suffering without meaning and the flight from authentic being." (p. 16)? Jung maintains that there is no individuation without meaning or intentionality and meaning can be discovered in the archetypal imagination. Hollis writes,

... perhaps life is meaningless, but we are meaning-seeking creatures who are driven to             understand it. Failing that, we attempt to form some meaningful relationship to life. We learn from archetypal psychology, from the core of primal religious experiences, from quantum physics, and from the artist's eye that all is energy. Matter is a dynamic, temporary arrangement of energy. Apparently, a religious symbol or a prayer, a work of art, or an expressive practice can so act on our psyche as to move that energy when it has been blocked, deadened, or split off. (p. 10)

The answer to how meaning is discovered is the crux of Hollis's book; he quotes Jung, writing in his memoir Memories, Dreams, Reflections: "'Meaninglessness inhibits fullness of life and is therefore equivalent to illness. Meaning makes a great many things endurable—perhaps everything... For it is not that "God" is a myth, but that myth is the revelation of a divine life in man.'" (p.15) The archetypal imagination is a part of the transcendent function; in the imagination we discover aspects of the soul, of our psychology, and thus one sees the importance of active imagination, sand play, drawing mandalas, or other creative activities like writing poetry or painting pictures. Hollis quotes Jung again, "'Meaning only comes when people feel that they are living the symbolic life, that they are actors in the divine drama. That gives the only meaning to human life; everything else is banal and you can dismiss it. A career, the producing of children, all are maya [illusion] compared to that one thing, that your life is meaningful.'" (p.18)
Of course, the purpose of all of C.G. Jung's life work is individuation, it is to help people live an authentic and meaningful life and to discover a greater consciousness and understanding of who and what we are. Hollis writes, "Consciousness is transformed by the encounter with mystery as invested in images theretofore foreign to it." (11) Individuation is the visionary transformation of consciousness, it is the discovery of a meaningful existence; whether in the paintings of Rene Magritte or the poems of Rainer Maria Rilke, all art is vision in its transformation of the complexity and depth of the unconscious mind into art.
So, what do we now make of Hollis's statement that What we wish most to know, most desire, remains unknowable and lies beyond our grasp? Money won't buy happiness and you can't live forever. We ask: what is meaningful in life, can we find individuation? We err if we think that an individuated existence is an intellectual construct or a theoretical destination at which one might arrive in the future. Individuation is not that distant place on the horizon that is impossible to reach; in the archetypal imagination we find a greater consciousness of the conflict between our inner and outer life and the discovery and realization of this can lead to a meaningful individuated existence, one that is authentic to psyche. This also helps us to discover that which we wish most to know, most desire.
Note: Read other reviews of books by James Hollis reviewed here, do a search on this blog.