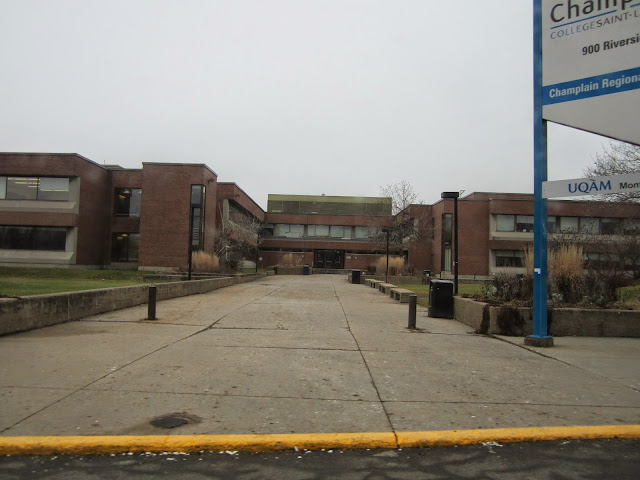 Here is one of my last social engagements, my speech at the retirement party for my friend Paul Leblond hosted at the home of our colleague Susan Woodruff. I loved teaching and I loved socializing at our office, we had a great long run with both! But everything comes to an end.

I taught at Champlain College from November 1976 to January 2012.

For most of that time I shared an office with Susan, John, and Paul.

I can honestly say I never went to work unhappy that I had to be there. I always loved teaching, the students, and the three people with whom I shared an office.

I met Susan first because she was on the hiring committee when I was interviewed. 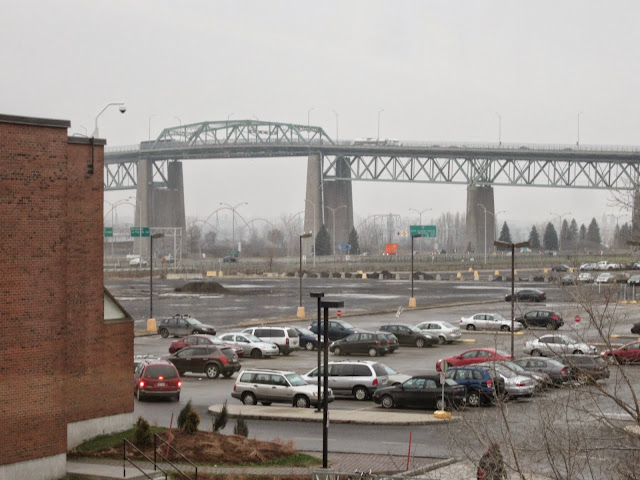 View of the Jacques Cartier Bridge from our office window

A week after I was hired and sitting in my tiny first floor office, John (who I'd never met before), came and welcomed me to the college.

A few weeks later I met Paul at a department meeting at the home of Ricky Zurif, our department head. It was evening and Paul came running in when the meeting was almost over, he was breathless and animated,  he'd been to a political demonstration and he had lots to say about the demonstration still going on in the streets.

It was always lively in that office of ours, you could depend on it, we talked constantly, whether about Quebec and Canada, American politics, our students, the administration at the college, teaching, and schedules that had four hours of back-to-back classes! And when John wasn't there (he was "off to meet the kiddies" as he sang leaving the office, to a tune from the Wizard of Oz) Paul (or "Paulium" as John called him) and I continued to talk. And talk. And talk.

Few teachers have more students congregate around them than Paul, these were animated group meetings during which time young people could say anything they wanted, and some of them probably experiencing for the first time an adult taking them seriously and listening to what they had to say. It was a free-for-all for students visiting Paul. Students meeting with Susan all seemed responsible and charming young women who read Jane Austen and would no doubt go on to respectable and responsible careers. Students visiting me were more or less normal people, including one young man who brought along his five foot tall Italian grandmother who wanted to give me a hug. Paul's students were a motley crew who sometimes had outrageous opinions. And when they finally left it was back to work for Paul, he had to organize the half dozen tapes or media he was bringing to class, photocopy and staple elaborately made hand-outs on green, pink, or blue paper, and go over his class preps before he left for class. One semester when Paul's students arrived to talk, this time a particularly loud and large group, I was happy to go off to the library and work there. 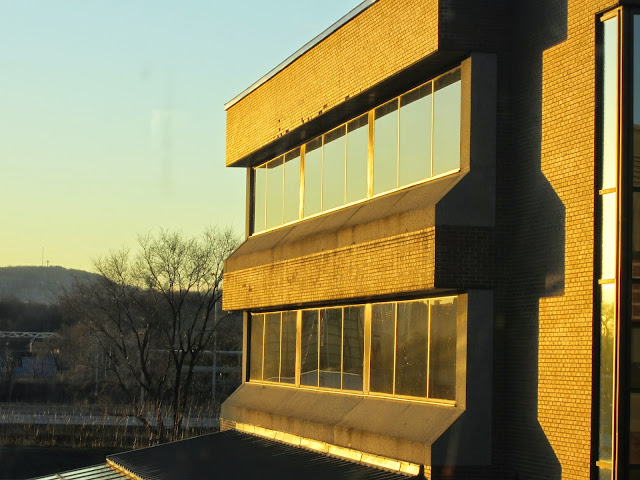 From a classroom window....

Paul gave so much of himself to his students. He is a genuinely kind and caring person. We often had the same students; I always recommended Paul's or John's or Susan's classes when students asked me for advice about the next semester. There was Patrick who had cerebral palsy and was in a wheel chair. Because of his illness it was difficult to understand what Patrick was saying but he visited Paul at least once a week for several years. We'd hear Patrick coming, his voice down the hall, and then he'd manoeuvre his wheel chair into the office. Patrick relied on Paul's help because no one would help him as Paul did. Paul was kind and caring to this young person, more than most people would have been.

Another memorable student was "Big Robert" who sweated profusely and filled the office with his presence. He was also intelligent and opinionated, but better to have students with passion and interest who actually read books and think for themselves than students sitting bored at the back of the class. Robert went on to earn several graduate degrees including his PhD and he returned to Champlain to teach for a few semesters. Again he visited our office and he was as opinionated as ever.

When students would apply to McGill University's medical school, Paul put in many hours helping each student individually with their applications. His father, Dr. Charles Leblond, was an eminent physician and medical cancer researcher at McGill and I always enjoyed hearing Paul's stories of growing up, including visiting, with his two brothers, the morgue at the McIntyre Medical Building (or some other building at McGill).

And then, every August, Paul would arrive at the office from travelling somewhere exotic in the world and we all listened to his adventures, looked at his photographs, and shared his enthusiasm for countries he'd visited, including over the years India, China, Japan, South America, South Africa, all across Europe, and numerous road trips by car across North America à la Jack Kerouac! There was always some curious bit of trivia he'd marvel over, for instance, do you know how many dozens of flavours of yogurt you'll find in a Paris grocery store? As someone who prefers to stay at home and read a book, or write a poem, it all sounded quite fascinating!

Paul was always kind and compassionate to his students and I know they responded to this quality in him. They knew he was a good person and they trusted him, they could rely on him, he brought out the best in them. Paul's classes and meetings during his office hours provided students with an environment that gave them the freedom to be themselves, to feel empowered to express themselves freely. No wonder he was considered one of the best teachers at Champlain.

And now, on behalf of Paul's colleague's in the English Department, and especially on behalf of Susan and John and myself, I would like to congratulate Paul for his many years of dedicated service to the students at Champlain College and thank him for being our wonderful office mate, a true friend, and for being himself.